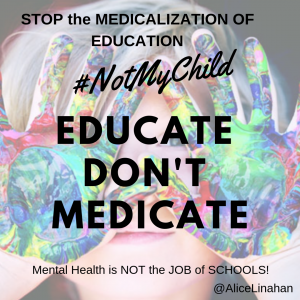 Read below: A Request to Texas Elected State Senators and Representatives

If you are a Texas Parent, Grandparent or Taxpayer and you want your VOICE HEARD~TAKE ACTION and SIGN the form below.

We believe you, our Elected Representative want to provide a safe and secure
education opportunity to all Texas students. We are requesting an appointment for you to meet with the parents and researchers who do not have a seat at the table at this time but are requesting to begin this discussion which is the process of the implementation of the “Medicalization of Our Schools” through Medicaid.

We are witnessing today what could be described as the grandest expansion of the Nanny State in the history of America. We believe this expansion to be one of the most diabolical, intricate, and subversive schemes to plague the landscape of American public policy toward Socialism.

This atrocity is “The Medicalization of Our Schools.”

A view from the classroom of today would astound onlookers that mental health and social, emotional, and behavioral interventions have replaced academics. With these wrap-around mental health services and interventions into personalities, values, beliefs, and dispositions at school, teachers are expected and forced to monitor and collect personal behavioral data on our children that has nothing to do with education. Data is collected, logged into state longitudinal data systems, shared, and ultimately, exposes our children to ‘surveillance capitalism.’ This personal data is freely given and used by outside contractors, foundations, and businesses to create software, curricula, activities, and programs that delve into changing the personal qualities of children and their families according to a government set of objectives.

Schools represent a “captive audience” and as such, prime targets for social policy change.
From a purely educational viewpoint, this could be termed “The Destruction of the American Educational System.”

From a health care perspective, this could be viewed as “The Subversion of the
World’s Finest System of Health Care.”

From a societal vantage point, this could be described as “The Subduing of the
American Family.”

However, because of the integration of business and labor, this could also just as accurately be dubbed, “The Collectivization of American Capitalism.”

Analyzed from a public policy perspective, it could be called “The Demise of
Representative Government.”

All of these titles would be accurate because each of them describes different appendages of the same program. What is involved in the “Medicalization of Our Schools?” At issue is Medicaid with screenings and interventions that take place under the cloak of prevention and “health.”

Once the government-sponsored health insurance program for the poor, Medicaid has now moved mainstream into our schools. It is paying salaries, funding multiple programs that boldly intrude into the sanctity of the home, and is the cause of escalating federal and state budgets. If this weren’t objectionable enough, the Medicaid component is but one spoke on the wheel of the larger societal restructuring movement that clearly orchestrates a number of large federal entitlement programs to produce what the Obama administration called a ‘safety net and prevention.’ In reality, if left unrestrained, it will become a “seamless web” through which no one will fall and ultimately no one escapes. The merging of federal data in HR 4174 escalates this agenda.

The universal screening of every normal child for social, emotional, and behavioral mental health problems has become the policy to identify as many children as possible for free federal Medicaid money. Our schools are milking the system through bureaucratic maneuvering. This future impetus combines Education and Welfare programs into a common thrust that appears to have bypassed our state legislatures. The fiscal impact of the merging of education and healthcare has not been thoroughly researched as the Medicaid program spans birth to age 20. Yes, American children are in danger of pure behavioral conditioning as a lucrative business. Our children are victimized by the intruding arm of government moving toward a controlled monopoly.

The larger wheel of implementation includes FERPA, Family Education Rights In Privacy Act, and ESSA, Every Student Succeeds Act, and both are to blame for the forward movement of these destructive combinations that include data-mining of our children, the identification and labeling of normal children as mentally disabled but not special education, psycho-behavioral interventions to change American children toward this collectivist state, and Medicaid that will pay for this abomination with its tentacles into the family with eventual case management in an Individual Family Service Plan. This plan assures that every American child will be identified with a unique national ID and a recycling system of behavioral interventions laid out in ESSA. The impact of a child having a DSM code (Diagnostic Statistical Manual For Mental Disorders) on their permanent record because of a mental health Medicaid reimbursement would have many future consequences including access to higher education, getting a job, or never owning a gun which would erase the Second Amendment in several years. American children are at risk of losing America in their future.

In Texas, some questionable behaviors have happened over the last couple of years in
regards to the lack of privacy with student information, which has gotten parents from all over the state’s attention.

First, during the summer of 2017, the TEA entered into a no-bid contract with a company named SPEDX. They handed over hundreds of thousands of student Individual Educational Plans (IEP) to SPEDx without proper parent notification or consent. IEPs include student diagnoses, medications, behavioral intervention plans, school accommodations, health data, and more. The SPEDx mission was to data-mine the information from the student’s IEPs and come up with a “plan” to fix special education in Texas. TEA terminated the contract when concerned parents spoke out against it. The owner and founder of SPEDx, Dr. Richard Nyankori, has since started a new company that sells special education software. To this date, the state of Texas has not received notification from SPEDx that the student IEP data was ever destroyed.

Secondly, in 2018 a lawsuit was filed against ACT claiming that ACT illegally sold detailed student disability data to colleges, scholarship programs, and other third parties who use the information for college recruitment and marketing. Colleges must practice “disability-blind” admissions under federal civil rights laws, however, they have gotten around this by buying student information from ACT, which is a direct violation of the American with Disabilities Act (ADA), among other laws.

We truly believe that as our Elected Official, you would be able to slow down and stop this “Child Abuse in the Classroom” that is being thrust on our Texas children today. Former President Obama had issued an Executive Order that unlocked the doors of privacy which now allows our children to be data-mined of their personal information which includes social, emotional, and behavioral information. FERPA must be changed.

We are requesting the truth be told to parents about the conditioning techniques codified in ESSA and performed without informed written parental consent that must be stopped. We believe that you would want Texas to continue to be the guiding light of our nation, to educate our children with the best education in the world, and prove to the non-believers that our children can compete with anyone in the world. We pray that you are listening.

Violations In Pursuit of the “Medicalization of Our Schools” Through Medicaid

Privacy Violations: Exchange and Re-Disclosure of PII continues, including data collected on attitudes, values, beliefs, and dispositions, without the knowledge or consent of parents. Directory information is cross-referenced with behavioral data collected on the local level. Privacy protections have been removed. Data, the new currency uses children as a commodity. These blatant data mining violations are child abuse.

Violations of the Protection of Pupil Rights Amendment, PPRA: Violations under Title I school-wide through the use of psychiatric, psychological examination, assessment, evaluation, or testing; Psychiatric or psychological treatment/ interventions deceptively used in classrooms without the knowledge, disclosure, or written permission of parents.

Malpractice and Maltreatment of Children and Babies by Teachers and Preschool Caregivers: Teachers/preschool caregivers, (exceeding their professional certifications), are required to screen, evaluate, perform anecdotal behavioral assessments, conditioning, and implement psychological remediation of the child’s attitudes, values, beliefs, and dispositions called social, emotional learning to comply with global initiatives under ESSA. These interventions are screened by teachers as mental health disabilities through fidelity (Do it right-techniques.) are now called “implementation science.” Standards defined by Department of Labor SCANS Report, create the process of “supply-chain management to humans.” This Social and Emotional Learning system sets up schools to begin coding mental health interventions in the classrooms of America for Medicaid reimbursements.

Need Proof this is happening; just watch this…

Link for all appendices: http://womenonthewall.org/wp-content/uploads/2019/03/Appendices-ForMedicalization-Of-Schools-1.pdf

Appendices For The Medicalization Of Our Schools Proof Points 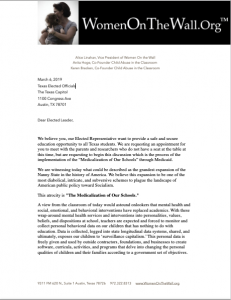