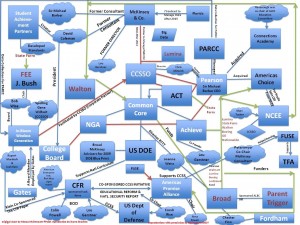 The following is the transcript of the narrative from the video above. (Note: Morna has added additional items she forgot to mention in the video in italics, and has inserted NOTES with extended information on certain items, and provided a list of references at the end).

Hi.  I’m Morna McDermott.  It’s July 23rd 2013 and this is my overview of corporate involvement in the Common Core.  Let’s start with U.S. Department of Education which funded, through grants and other funding, the Common Core via Race to the Top and handed it over to three major organizations: the National Governors Association, the CCSSO, otherwise known as the Chief Counsel State School Officers, and Achieve … who have partnered to disseminate, organize, manage or otherwise outsource the Common Core and the assessments that go with it.

INSERTED NOTE: I failed to mention that Achieve is funded in large part by ALEC-associated corporations including Bill and Melinda Gates Foundation, Boeing, GE Foundation, Lumina, Nationwide, and State Farm.

(Transcript continued): So let’s start over here. The Director of Race to the Top is Joanne Weiss who worked with the Broad Foundation which also has as one of its acting members Chester Finn with the Fordham Institute. Broad Foundation is also a member of ALEC which sponsored the bill called the Parent Trigger Act. I’ll come back to that.

INSERTED NOTE: A little more background on the Eli Broad Foundation.  This foundation advertises its commitment to education in the following way (according to their website): “Broad Superintendents Academy graduates are raising student achievement faster than their peers after three years in their positions. And Broad Residents are freeing up millions of dollars for the classroom by introducing central office efficiencies … ”

Sounds nice. But there’s more… According to one author: “The network involves outspoken individuals with elitist credentials, long time neo-liberals, right-wing think tank pundits and their conservative foundation sponsors, other foundations such as Wallace and the Broad Foundations, and quasi-government agencies … Broad money is sloshed behind the scenes to elect or select candidates who buy the Broad corporate agenda in education (see Emery and Ohanian, 2004, pp.89-94). Broad’s enemies are teacher unions, school boards, and schools of education. What all three have in common is that they eschew corporate, top-down control required in the Broad business model.”

INSERTED NOTE: America’s Choice began as a program of the National Center on Education and the Economy (NCEE), a not-for-profit organization headquartered in Washington, D.C. In the autumn of 2004, America’s Choice was reorganized as a for-profit subsidiary of NCEE.

Since its founding in 1988, NCEE has been a leader of the educational standards movement in the U.S., and the America’s Choice program has become a premier provider of comprehensive school and instructional design services, technical assistance and teacher professional development.

According to Jay Greene: “NCEE’s scheme was originally financed by a $1,500,000 pilot grant from the Gates Foundation.  It will now benefit from a sweetheart deal of $30,000,000–all taxpayers’ money. Having Gates pay for both NCEE’s start-up and the development of Common Core standards certainly helped America’s Choice to put its key people on Common Core’s ELA and mathematics standards development and draft-writing committees to ensure that they came up with the readiness standards Gates had paid for and wanted NCEE to use. NCEE has a completely free hand to ‘align’ its ‘Board’ exams exactly how it pleases with Common Core’s ‘college-readiness’ level and to set passing scores exactly where it wants, since the passing score must be consistent across piloting states.”

Other funders of NCEE who are also members of ALEC include Eastman Kodak Company, Lumina Foundation, and Ford Motor Company Fund, Boeing, Xerox, and Broad Foundation.

(Transcript cont.): The NCEE is funded by Walton- come over here-The Walton Foundation which is a member of ALEC and is basically associated with Walmart, directly funds the Common Core State Standards. And again, too many too many connections to mention- this is just brought sketch. I’m gonna come back up over here to the CCSSO (whose director is Tom Luna- correction, current Director is Chris Minnich former employee of Pearson) to look at their connections with McKinsey and Co. which is a global consulting firm. Their  big thing is called “Big Data”… they believe that the data is the answer to all things right now, (and) as you can see they’ve got their fingerprints all over everything in the Common Core. For one thing, David Coleman was one of the architects of the Common Core … he created the Student Achievement Partners which helped develop a standards, (and he) was a former consultant for McKinsey. Lou Gerstner, who is the co-founder of Achieve, was the former director at McKinsey & Co. and Sir Michael Barber was a former consultant McKinsey, is now one of the CEO’s at Pearson.  Pearson partners with the PARCC Consortium for the assessments. And I said they already partner with Achieve and ACT. The PARCC, following the screen line (in red) all the way over here, has their data collection (in) a partnership with inBloom. Now inBloom is a part Wireless Generation and is contracting with several states to collect the data for all their testing. The two key players in inBloom are Joel Klein (and) Rupert Murdoch. And in addition, members of the Board of inBloom include Margaret Spellings, Gene Wilhoit (former Executive Director) of the CCSSO, and also on the board is Bob Wise.  Bob (Wise) was the chair for the Alliance for Excellent Education which is the brainchild Jeb Bush. It’s funded by State Farm.  The Alliance for Excellent Education partners with, or supports, the Common Core. I’m gonna… follow me down here…. to the Council for Foreign Relations which supports a national curriculum and has been a big promoter at the Common Core Standards and has had direct influence on it. They created a paper in partnership with the U.S. Department of Defense and with America’s Promise Alliance to craft paper call the Education Reform and National Security Report and its authors supported the Common Core State Standards initiative. So, on the Council for Foreign Relations you have Lou Gertsner, who you know is the co-founder of Achieve, as I already mentioned, and who is a former director at McKinsey & Co. Also on the Board of Directors (of America’s Promise Alliance) is general Colin Powell – one of the things that this paper mentioned was the importance of the U.S. Department of Defense in overseeing and managing the Common Core. Other signers of this paper include Condoleeza Rice – and one of the cosponsors of this paper was America’s Promise Alliance which supports the Common Core .

INSERT: Visible but not mentioned is endorsement on this paper by a representative of the American Enterprise Institute,Rick Hess, who ironically vocalizes public skepticism of the Common Core. See the actual document for a full list of signatories.

(Transcript continued): The chair of America’s Promise Alliance is Alma Powell. The co-chair is Greg Petersmeyer, who is a McKinsey and Co. consultant and (he) helped develop something called Fuse Corporation which, among other things, supported Teach for America. So Fuse Corp is one of the partners of America Promise Alliance which is funded by Pearson Foundation, the Walmart Foundation which isin ALEC, the Gates Foundation, Lumina which is in ALEC, Boeing which is in ALEC, and Lockheed Martin which is the world’s largest weapons manufacturer and is a member of ALEC, (and) The Ford Foundation. Bill Gates…um this is a board sketch because there are way too many things to mention about Bill Gates, but among other things… on of the Board of Directors for Wireless Generation is an employee at the Gates Foundation.

INSERT: Clarification of an error. The former Gates employee works for inBloom, not Wireless. Her name is Sharren Bates and she is the Chief Product Officer. https://www.inbloom.org/leadership. Also, on the Board of Director sits Deputy Director of the Next Generation Models Team for Bill and Melinda Gates Foundation, Stacey Childress.

(Transcript continued): The Gates Foundation directly funded the inBloom network. Gates also funds the College Board, which is now run by David Coleman–remember from Student Achievement Partners that made the standards for Common Core, and (who) was a former consultant at McKinsey & Co–um where’d they go… Gates Foundation also directly funds the Common Core State Standards. The National Governors Association partners with the College Board and also partners with the Achieve.  The CCSSO also partners with McKinsey & Co. to manage the PARCC after 2014. This initiative is also partnered by Lumina which is a member ALEC …So after 2014, McKinsey and Co. may be managing our children data. Specifically, the state of Florida has potentially considered a contract with McKinsey and Co. to manage the PARCC as of 2015. Again, this is a broad sketch-and there’s always more than meets the eye. But if every line was on here that needed to be on here, it would be even more unreadable than it already is. I forgot to mention U.S. Department of Education… the key advisers for the 2009 U.S. Department of Education “Blueprint” included largely members at McKinsey and Co. and the Broad Foundation. So it’s curious how much ALEC contends that it opposes the Common Core yet so many organizations that are members of ALEC have funded its inception and continue to promote its perpetuation from state to state.

NCEE (Natl Center for Education and the Economy): http://truthinamericaneducation.com/common-core-state-standards/gates-ncee-influence/