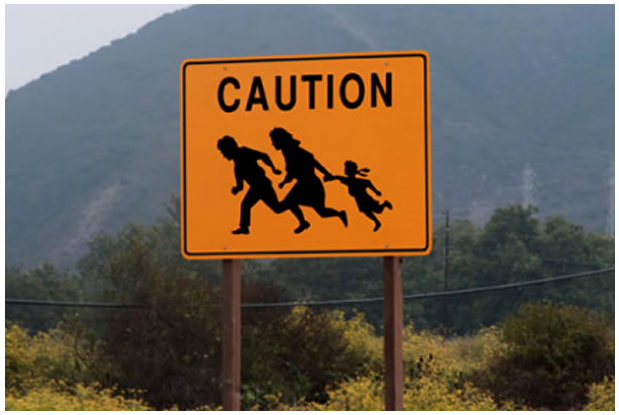 Odd that if you repeat something enough, people actually start believing it despite facts that prove the opposite is actually true.

Since the election of President Barrack Obama, Americans have witnessed this phenomenon on a grand scale.  Day after day, we’ve watched the main stream media join in lock step with the current administration to bring about the total transformation of our nation.

Most disturbing is the determination by some Republicans to grant amnesty, legal status and a pathway to citizenship to millions of uneducated and undereducated illegal aliens.  The end result of such action will turn our formerly exceptional nation into a North American version of neighboring Third World countries.

Hours after Romney’s defeat in 2012 the main stream media tossed out the poisonous bait to the GOP leadership and they swallowed it – hook, line and sinker.  The bait is the great lie that America is unable to secure its borders or enforce its long standing immigration laws so American citizens must shut their mouths and witness their nation’s “inevitable changing demographics.”  Inevitable?  Only if our government continues down the path it is on – allowing the unarmed invasion that has been going on now for several decades.

America possesses not only the right but also the knowledge and technology to stop this nonsense immediately IF only our elected officials have the backbone and desire to speak the truth and act accordingly.   Do they?

Many Republican party elites, party leaders (at all levels), and big business owners/donors jumped on the Democrat amnesty bandwagon to give 11, 20, or 30+ million illegal aliens residing in our country legal status and a pathway to citizenship.  The truth is that those numbers will be much greater when chain migration is factored in.

So who is leading this insane suicide mission the GOP has launched?

At the front of the pack are corporations and “Big Business” — more specifically, Republicans who got their tail ends handed to them in 2007 when the grassroots successfully rose up and killed President Bush’s attempt to force “comprehensive immigration reform” upon rule-of-law American citizens.

Since that 2007 defeat the group has been working overtime to convince lesser informed party voters and GOP leaders (at all levels) that the party must abandon its traditional Republican rule-of-law stance on immigration in order to win the Hispanic/Latino vote and future elections.  Few seem to know that history does not support that line of thought.

U.S. census stats reveal that the majority of our illegal aliens come from countries south of our border.   While immigrants from other parts of the world tend to vote Democrat once granted American citizenship, a review of Hispanic/Latino voting patterns is vital in relation to predicted demographic shifts in America and upcoming election outcomes.

To those who have been following this debate and reviewing the facts about voting patterns of Hispanics/Latinos in America over the past 32 years it is hard to call the actions of the Republican leadership anything other than utterly stupid.

Since it seems many people in our nation appear to lack common sense when it comes to critical thinking, rule-of-law Americans across the nation should be asking the following two common sense questions as they consider and discuss this extremely serious issue:

First, if there was any remote possibility that the proposed amnestied 11 – 30+ million illegal aliens would vote for Republicans do you honestly think the Democrats would be working so hard to give them amnesty and eventually the right to vote?

Secondly, based on historical stats – why would any dedicated Republican Party leader support an action that ultimately would deliver millions of new Democrat voters for decades to come while perpetuating Republican defeats?

Obviously, the Democrats would not be working so hard to give legal status/path to citizenship/amnesty or anything else to 11 – 30+ million new people if they were in any way inclined to become Republican voters!  Hello Republicans – anyone home?

Statistics on voting patterns compiled by the Pew Hispanic Center, the Center for Immigration Studies and others have provided compelling data that must be considered.

The following excerpts from a November 8, 2012 Center for Immigration Studies article by Ronald W. Mortensen, entitled “Hispanics Were Democrats Long Before Illegal Immigration Became an Issue”  should give one reason to wonder who is doing the homework for the GOP on this issue:

“… pro-illegal-immigrant elements of the Republican Party fail to acknowledge that for at least the last nine elections, Hispanics have voted heavily in favor of Democratic presidential candidates over Republican candidates by an average of 64 percent to 31 percent, as shown by data compiled by the Pew Hispanic Center.”

Article excerpts provide additional insight on several of the referenced elections in response to a Wall Street Journal article absurdly suggesting Romney lost the 2012 election because of his stance on illegal immigration:

“The expulsion crowd at the Journal never acknowledges the fact that pro-amnesty, “comprehensive immigration reform” leader John McCain (R-Ariz.), was rejected by 67 percent of Hispanic voters, that 72 percent of Hispanics voted against Bob Dole, that 69 percent voted against the elder Bush and that 62 percent voted against the younger Bush. So, it could be argued that Romney’s “tough” illegal immigration stance cost him only 4 percentage points of the Hispanic vote as opposed to that of McCain and that he actually picked up 6 points over Dole and 2 points more than Bush senior did.

“The bottom line is that Hispanics are largely Democrats and they don’t swing their support to pro-illegal-immigration Republicans such as McCain and or even to Bush senior, who was vice president at the time of the 1986 amnesty”.

Still have doubts as to the likelihood of future massive declines in Republican Party victories should another amnesty pass?   If so I encourage you to read an article entitled,  “Immigration, Political Realignment, and the Demise of Republican Political Prospects” by James G. Gimpel.

It certainly appears that many “Big Business” Republicans and GOP leaders could care less about the America they leave to our children and grandchildren.  If they did, they would be leading the charge for America to choose the best and brightest immigrants for legal and orderly entry into our nation.  Instead, they are doing the exact opposite.

If you value the America you grew up in, do your homework and Seek the Truth on the issue of illegal immigration.   Then … Share the Truth with you friends, neighbors, elected officials, b­­­­­­­­­usiness owners and anyone else who will listen.  Last but not least … continue to Stand for Truth and pray God gives us the strength to prevail in the battle for America’s survival.