The National Republican Party passed a resolution against Common Core in their platform. Yeah! 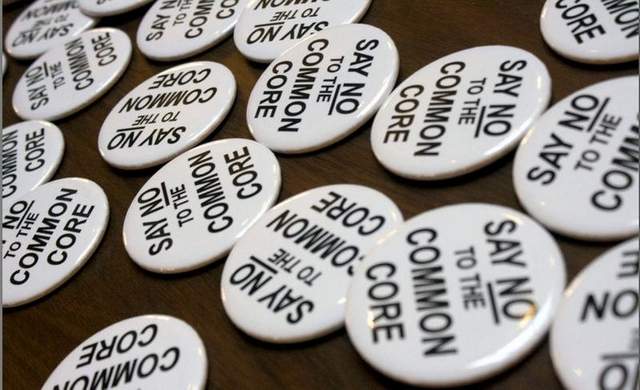 and to Truth in American Education

Here is the original draft:

WHEREAS, the Common Core State Standards (CCSS) are a set of academic standards, promoted and supported by two private membership organizations, the National Governor’s Association (NGA) and the Council of Chief State School Officers (CCSSO) as a method for conforming American students to uniform (“one size fits all”) achievement goals to make them more competitive in a global marketplace, (1.) and

WHEREAS, the NGA and the CCSSO, received tens of millions of dollars from private third parties to advocate for and develop the CCSS strategy, subsequently created the CCSS through a process that was not subject to any freedom of information acts or other sunshine laws, and never piloted the CCSS, and

WHEREAS, even though Federal Law prohibits the federalizing of curriculum (2.), the Obama Administration accepted the CCSS plan and used 2009 Stimulus Bill money to reward the states that were most committed to the president’s CCSS agenda; but, they failed to give states, their legislatures and their citizens time to evaluate the CCSS before having to commit to them, and

WHEREAS, the NGA and CCSSO in concert with the same corporations developing the CCSS ‘assessments’ have created new textbooks, digital media and other teaching materials aligned to the standards which must be purchased and adopted by local school districts in order that students may effectively compete on CCSS ‘assessments’, and

WHEREAS, the CCSS program includes federally funded testing and the collection and sharing of massive amounts of personal student and teacher data, and

WHEREAS, the CCSS effectively removes educational choice and competition since all schools and all districts must use Common Core ‘assessments’ based on the Common Core standards to allow all students to advance in the school system and to advance to higher education pursuits; therefore be it

RESOLVED, the Republican National Committee, as stated in the 2012 Republican Party Platform, “do not believe in a one size fits all approach to education and support providing broad education choices to parents and children at the State and local level,” (p35)(3.), which is best based on a free market approach to education for students to achieve individual excellence; and, be it further

RESOLVED, the Republican National Committee recognizes the CCSS for what it is– an inappropriate overreach to standardize and control the education of our children so they will conform to a preconceived “normal,” and, be it further

RESOLVED, the 2012 Republican Party Platform specifically states the need to repeal the numerous federal regulations which interfere with State and local control of public schools, (p36) (3.); and therefore, the Republican National Committee rejects this CCSS plan which creates and fits the country with a nationwide straitjacket on academic freedom and achievement.

Voices Empower has partnered the Freedom Trailer Teams to Educate, Inspire and Motivate.