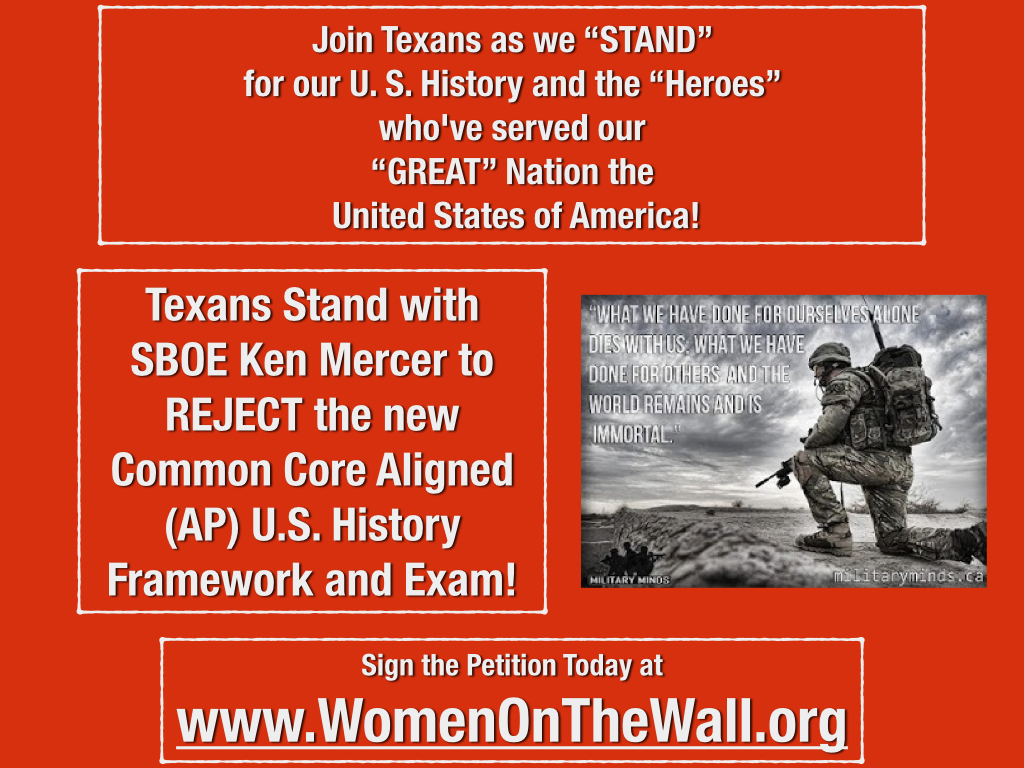 Parents, Grandparents and Tax Payers “YOU”
are being called to ACTION!

It is Time to Take a Stand!

How will the New AP US History Framework coming down from College Board President David Coleman affect TEXAS children this Sept.?

As Stanley Kurtz stated in his article New War Over High School History….http://www.nationalreview.com/corner/382400/new-war-over-high-school-us-history-stanley-kurtz

“Americans are only just now waking up to a quiet but devastatingly effective effort to replace the teaching of traditional American history in our high schools with a new, centrally-controlled, and sharply left-leaning curriculum.

The College Board, the company that issues the SAT and the various Advanced Placement (AP) exams, has created an elaborate new framework for the AP U.S. History Exam that will effectively force nearly all American high schools, public and private, to transform the way they teach U.S. History.
Texas is at the forefront of the resistance to the new AP U.S. History Exam, but the battle is not going well.  Ken Mercer, a member of the Texas School Board, is attempting to introduce a resolution rebuking and rejecting the new AP U.S. History Exam.  Unfortunately, he is now being told that he must wait to introduce the resolution until September, when it will be too late.

Texas makes up about 10 percent of the College Board’s market.  Were Texas to reject the new AP U.S. History Exam, the entire project could be put into doubt.”
As Stated by SBOE Ken Mercer in his latest Op-ed.

“For today’s patriots, this is our Valley Forge and our D-Day –
this is the Revolution of 2014!”   Ken Mercer, Texas State Board of Education

“How bad is the new AP U.S. History Framework? Here are a few key items verified with Larry Krieger (retired teacher and author recognized by the CB as one of the best AP teachers in 2004 and 2005) and Jane Robbins (Senior Fellow at the American Principles Project):

A word search of the entire 98-page document will not find one military commander or one Medal of Honor recipient. Our best and brightest students will thus learn nothing of the heroism and sacrifices of Americans in uniform.
The CB instead presents an overwhelmingly negative viewpoint of U.S. history that will please America-haters such as former Illinois professor Bill Ayers.
This unelected body is rewriting United States history and promoting among our students a disdain for American principles and a lack of knowledge of major American achievements.
History is a dramatic story which, if taught well, allows students to study both the good and bad of America. The new APUSH Framework purposely stresses the negative while dismissing America’s positive contributions.
If we do nothing, this radical AP U.S. History course will enter our high schools this fall.

SO WHAT CAN TEXAS PARENTS, GRANDPARENTS AND TAX PAYERS DO?

Sign the Petition.
SHOW UP IN AUSTIN JULY 18TH AND SUPPORT THOSE WHO TESTIFY.