4.2.13 *I took notes of this meeting as fast as I could, and I trust that the information presented is accurate.

SB 1406 seeks to give the elected members of the Texas State Board of Education (SBOE) oversight and direction over CSCOPE.

TWO SIDES OF THE COIN

Basically two groups of people testified today.  One group was made up of the school administrators and school boards who think they cannot live without CSCOPE.  They claim CSCOPE is a much-needed management tool and that their districts cannot possibly afford the expense of writing their own curriculum. Hence, CSCOPE is the answer to all their problems!  Never mind that qualified teachers have always been able to write their own excellent lesson plans for eons.

The other group was made up of the parents and the citizens of Texas who are concerned with the many very troubling aspects of CSCOPE and who either want the Texas State Board of Education to be given oversight and direction over CSCOPE or else want to put CSCOPE completely out of business.

The first group seemed more concerned about CSCOPE giving them a system to micromanage classroom teachers while the latter group talked about their concerns over what their children and other Texas children are actually learning in the CSCOPE lessons.

In other words, the first group was concerned about control; while the latter group was focused on students’ learning and the damage done to children’s

It is important to point out that all of the many school administrators who came to testify were getting paid for their mileage, meals, time away from school, and overnight accommodations.

The parents and the public who came to testify did so on their own dime. They took off work or else left their families to drive all the way down to Austin. If I were a Texas Senator, I would take much more seriously the concerns of those people with no vested interests.

The school administrators all talked from the same playbook (as usual). Most of them had been misinformed about the bill and thought it was a bill to take local control away from their districts.

As Senator Dan Patrick stated, “Wouldn’t it make you sleep better in the future if you knew that the SBOE had looked over the lesson plans so that you won’t have to worry about what’s in them?”

Senator Campbell explained to the school administrators that legislators appropriate dollars for education and are accountable constitutionally (1) to make sure those funds are spent efficiently and (2) to see that an adequate education is provided for Texas’ public school students.

The Senator said that since CSCOPE is flawed with errors and had been shrouded in secrecy that a light needed to be shined on it.  She emphasized that SB 1406 does not take away local control.  It makes sure that legislators are held accountable for the funds that are entrusted to them by the taxpayers.

Barbara Cargill, chair of the Texas State Board of Education (SBOE), described how she had been asked by Senator Patrick to appoint an ad-hoc committee. It met on Friday, March 29, in Dallas, Texas. The ad-hoc committee is made up of four SBOE members and three CSCOPE directors including the state TESCCC director.

Cargill explained that on April 22 – April 29, the public can start applying to be on the review panels.  May 13 is the hard deadline for SBOE members to submit their panel nominations. Three to nine people will be chosen for each panel based upon the number of CSCOPE lessons assigned to them.  Selected panel members will be notified by May 20, and passwords will be assigned. All of the reviews will be done virtually.

The end goal is to review all of the 400 lessons and tests in the Social Studies component of CSCOPE.  (The total of CSCOPE lessons in all four subject areas is close to 1,600).

The panels are to finish going through the first two six weeks of lessons between June 3 – 16.  If the panel members need to meet, they can go to their nearest Education Service Centers and participate through videoconferencing.  This will keep the costs down and will keep the panel members from having to travel and be gone from home. 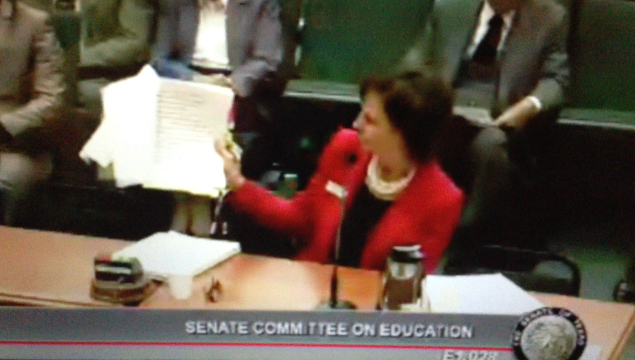 The SBOE approved operating board rules in its January 2013 meeting; and taking the objectives for instructional materials approved by the Board, Cargill hopes to combine these to form an easy-to-use, objective checklist that the panels can utilize in their evaluations.

SB 1406 does not require TESCCC/CSCOPE to implement the recommendations of the review panels, but it is hoped that TESCCC/CSCOPE will choose to do so rather than experience the public’s animosity if the SBOE’s good faith gesture is ignored.  Cargill pointed out that the SBOE is doing this review without any cost to TESCCC/CSCOPE and that they should be glad to utilize the panels’ findings.

Barbara Cargill came prepared with a large packet made up of copies of CSCOPE lessons that contained factual errors, grammar/spelling mistakes, and questionably left-leaning examples from CSCOPE lessons.  These included such examples as:

Throughout the five-hour hearing on SB 1406, it did not seem to matter how many mistakes, flaws, misspellings, grammatical errors, factual errors, inappropriate, and biased statements were documented.  The school administrators sang CSCOPE’s praises as if they had not even heard any of the  negatives that were presented.  Hardly any of the administrators seemed bothered about CSCOPE’s secrecy, lack of transparency, the teacher “gag” order, and the highly unethical (or illegal) incorporation of TESCCC  operating as a shell company after using taxpayers’ dollars to create its product — all done without permission from the Texas Legislature.

Under questioning by the Senators, an ESC/TESCCC director indicated that a list of about 200 CSCOPE writers had been provided to the Senators and that some of these wrote entire lessons and some wrote only parts of lessons.  He also admitted that insufficient oversight and review of the CSCOPE lessons had occurred

Sen. Patrick asked one of the ESC directors to provide the Senators with a breakdown of how the $15 to $16 Million paid to CSCOPE last year was utilized (e.g., how much was paid to the writers, etc.)  The director stated that the people at the ESC’s who work on CSCOPE draw their salaries from the ESC’s and that their jobs are dependent upon CSCOPE’s success.

Since the Jan. 2013 public hearing, TESCCC has agreed to dissolve itself; but Sen. Patrick said that if CSCOPE continues to stay in the lesson plan business, it may be necessary to create a statute that will make sure no backtracking occurs.

Witness Colleen Vera presented documents she was finally able to get from TESCCC’s released board minutes that showed the directors had talked about selling CSCOPE to other states. She also found a statement from a 2011 meeting in which the directors were discussing whether CSCOPE’s primary goal should be just making money or serving the children of Texas.

John Griffing provided testimony that proved that CSCOPE schools did worse than non-CSCOPE schools on the STAAR/End-of-Course tests (2011-12 School Year).  He stated, “CSCOPE does not work on STAAR/EOC.  Why remake the wheel?  Why not emulate the schools that are succeeding?  Why trust something that has shown us only failure?”

Testifier Peggy Venable who travels widely around the state of Texas said she has heard CSCOPE complaints everywhere she has gone.  She said she has yet to meet any citizens and/or parents who like CSCOPE.

Jeanine MacGregor presented the Senators with actual examples of CSCOPE lessons that have been plagiarized.  She also showed the Senators a slide (Slide #8) from a CSCOPE/TESCCC power point that vilified by name some of the people who had come to the Jan. 31, 2013 Senate Education Committee  hearing and had testified against CSCOPE.

Sen. Patrick was visibly upset that such a list had been circulated and said the Texas Attorney General would be notified so that he could track down who (ESC, TESCCC, local school district, individual) had initiated Slide #8.

Neal Fry offered a replacement bill for SB 1406 that would take care of the glaring double standard that exists in SB 6 regarding textbooks vs. online curriculum.

Senator Campbell voiced her concern about the questionable CSCOPE lessons that have been removed by TESCCC once located but that have misinformed students for many years.

Sen. Patrick indicated his concern with the large number of curriculum standards that are found in the TEKS and wants the next legislative session to consider reducing the number of TEKS elements.